Hollywood is no stranger to celebrity doppelgängers—gathering so many people with symmetrical faces in one industry is bound to end up in a few pairs of lookalikes.

There are plenty of lookalikes in Hollywood. Leighton Meester and Minka Kelly, Isla Fisher and Amy Adams, Felicity Jones and Daisy Ridley, Jesse Plemons and Matt Damon, just to name a few doppelgangers. Though all of these people may look alike, they all have diverse filmographies and lives.

Most notably, actresses Jaime Pressly and Margot Robbie have given even “Spot the Difference” enthusiasts a run for their money. 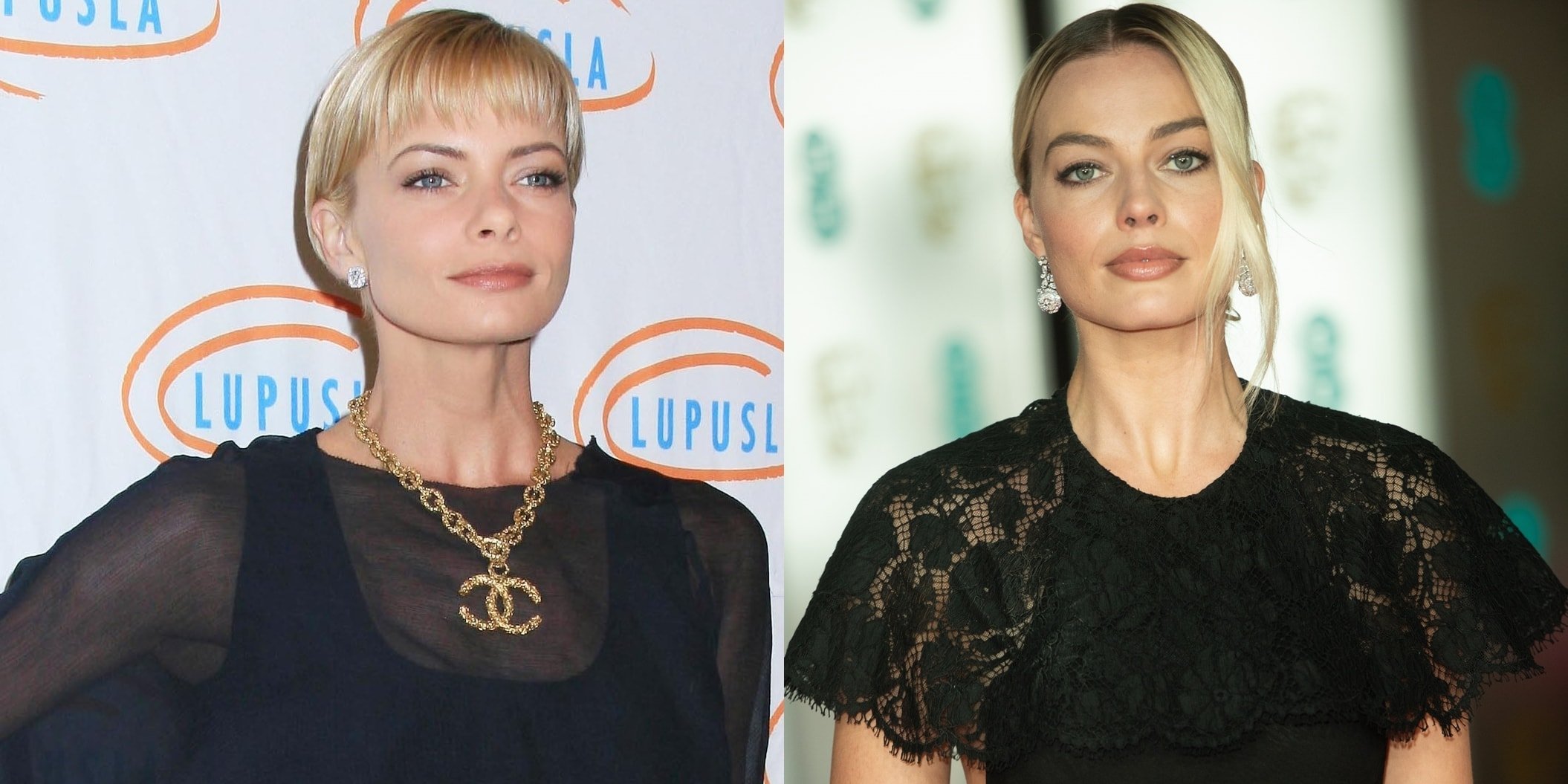 Both gorgeous, blue-eyed blondes, Pressly and Robbie share such striking facial similarities that it has led internet sleuths to speculate that they could be cousins, sisters, or even the same person.

Despite all of these theories, Pressly and Robbie do not have any familial relation, and they are definitely different people. Probably.

The internet has a lot to say about these two similar-looking actresses, though they look quite different when smiling.

One Twitter user shared a picture of the two next to one another and said, “God got lazy and just hit copy/paste on this one.” 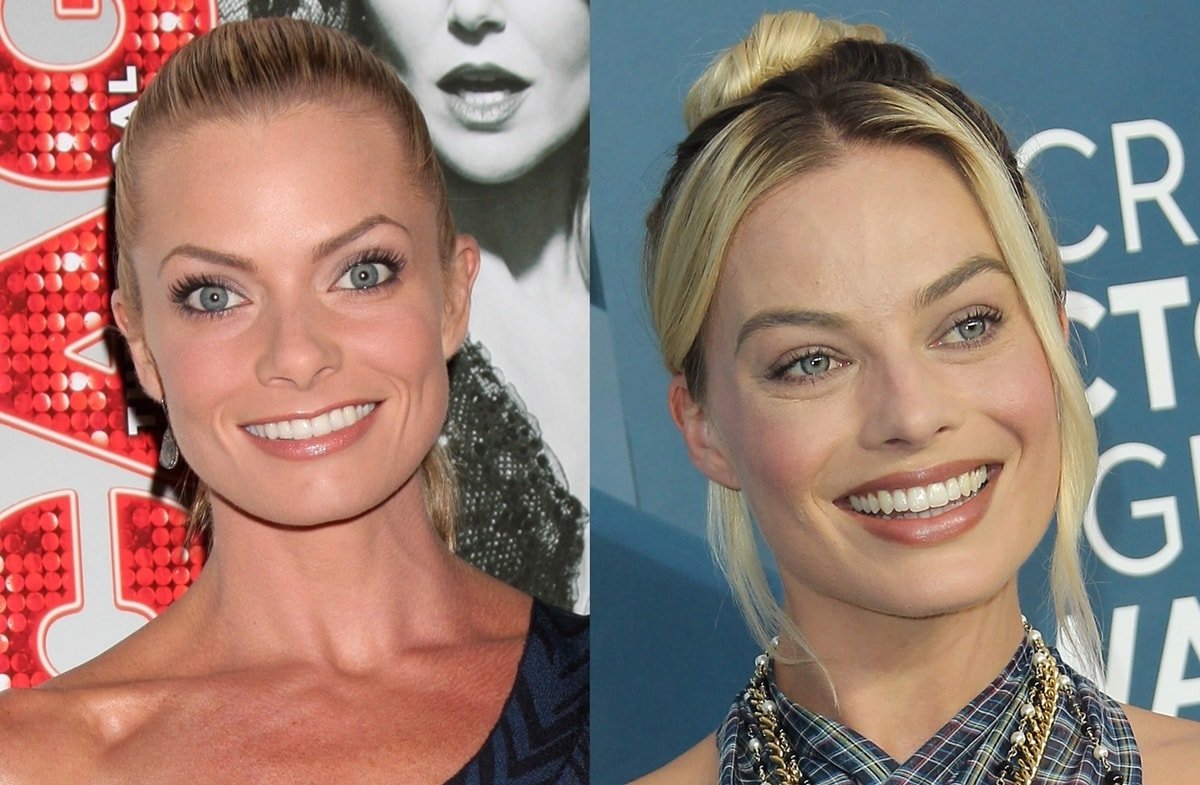 Another user was confused while watching I, Tonya: “Y’all Margot Robbie looks like Jaime Pressly when she was in My Name Is Earl, so in “I, TONYA” I kept thinking I was watching Jaime and it was Margot now I’m watching MOM with Jaime and I’m now in a weird universe where they look too alike.”

Someone else added Emma Mackey, yet another look-alike, to the mix, and insisted they looked like clones. 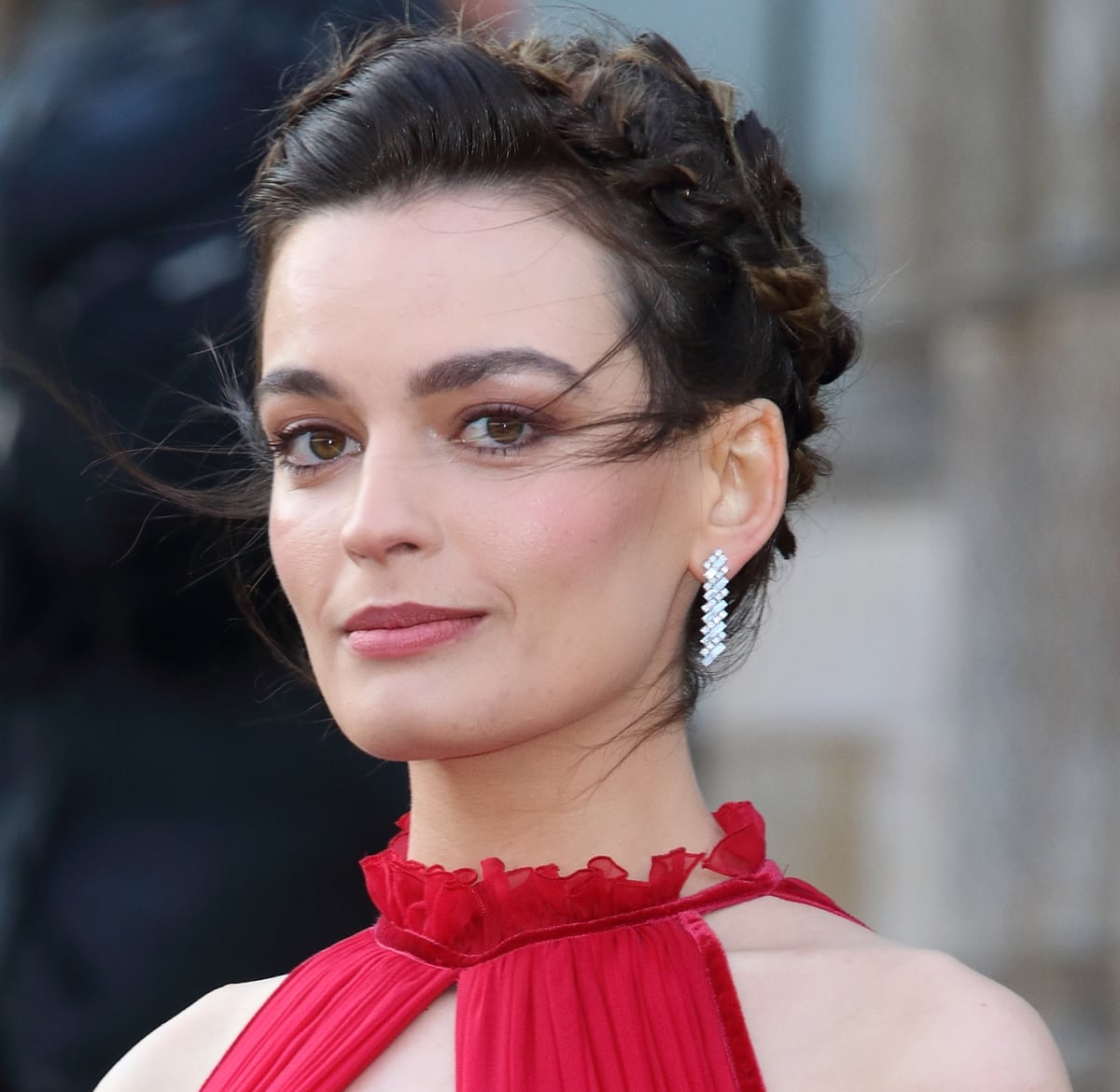 “I genuinely just don’t see it at all,” Netflix’s “Sex Education” actress Emma Mackey told The Independent in a January 2020 interview.

“Like, it’s lovely to be compared to Margot Robbie, but mostly I’d rather people focus on the jobs that we’re both doing rather than what we look like.”

“Hollywood churns out people who look the same and we love to put people in boxes,” added Mackey. “It’s just a thing that we do as a species, we categorize people, we always have.”

“Someone came up to me, I was eating a burger,” said Robbie in an interview with BBC Radio 1’s Ali Plumb.

“And they were like ‘I loved you in ‘Sex Education,’ that show is so cool, we just started watching it.’ And I was like ‘I’m so sorry, it’s not me.’” 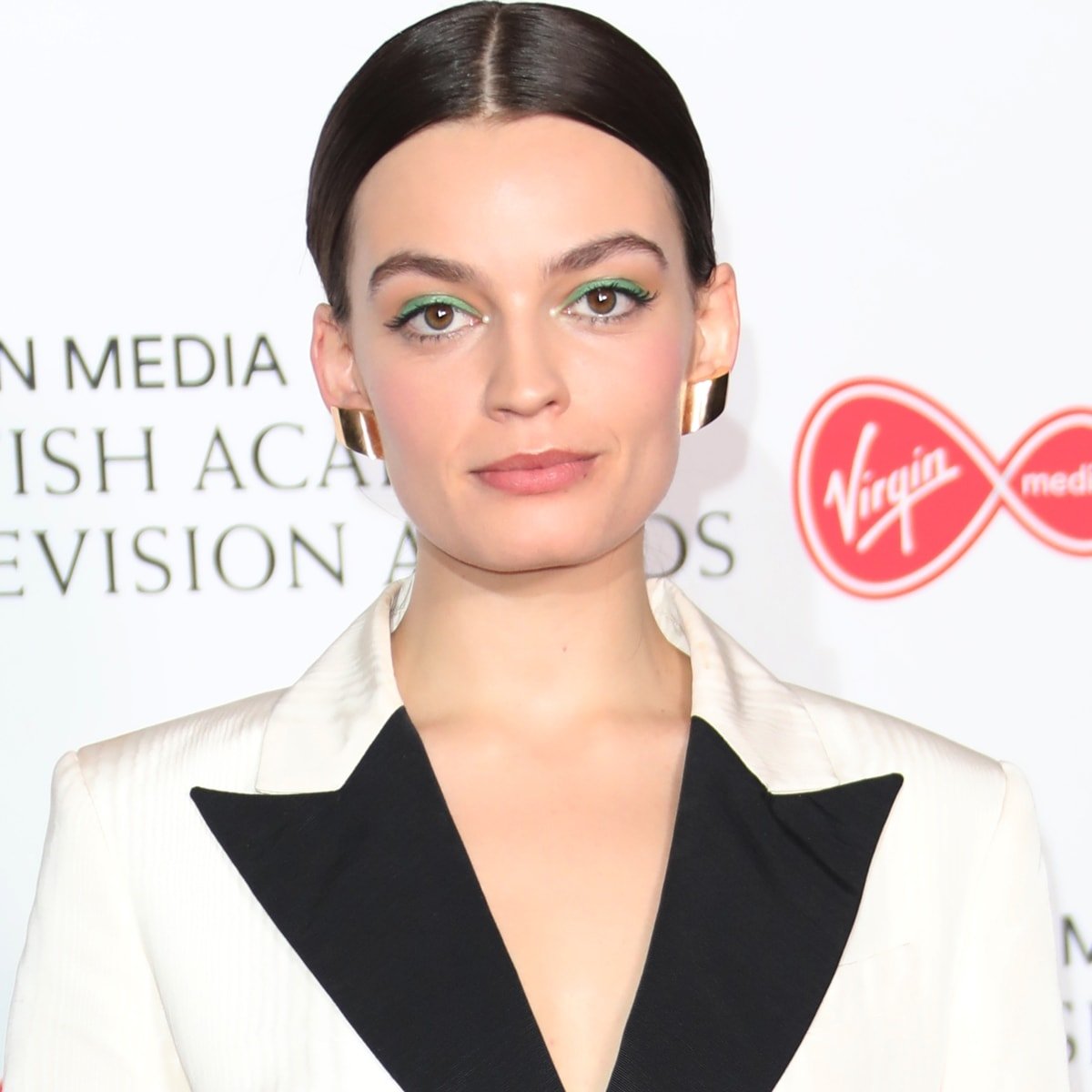 Emma Mackey does not want to be compared to Margot Robbie (Credit: Lia Toby / WENN)

Other users have even mentioned filming a Parent Trap-type movie starring both Pressly and Robbie, which honestly sounds like a great idea.

Jaime Pressly began her career as a teenage model and is now a decorated actress with plenty of roles under her belt. The majority of her screen credits are from television shows, such as her roles in Mom, BoJack Horseman, Jennifer Falls, and Jack & Jill.

You might know her from her iconic role in My Name is Earl, where she plays the fast-talking, sassy Joy Turner. Pressly went on to win multiple awards, including a Primetime Emmy in 2007 for this role. 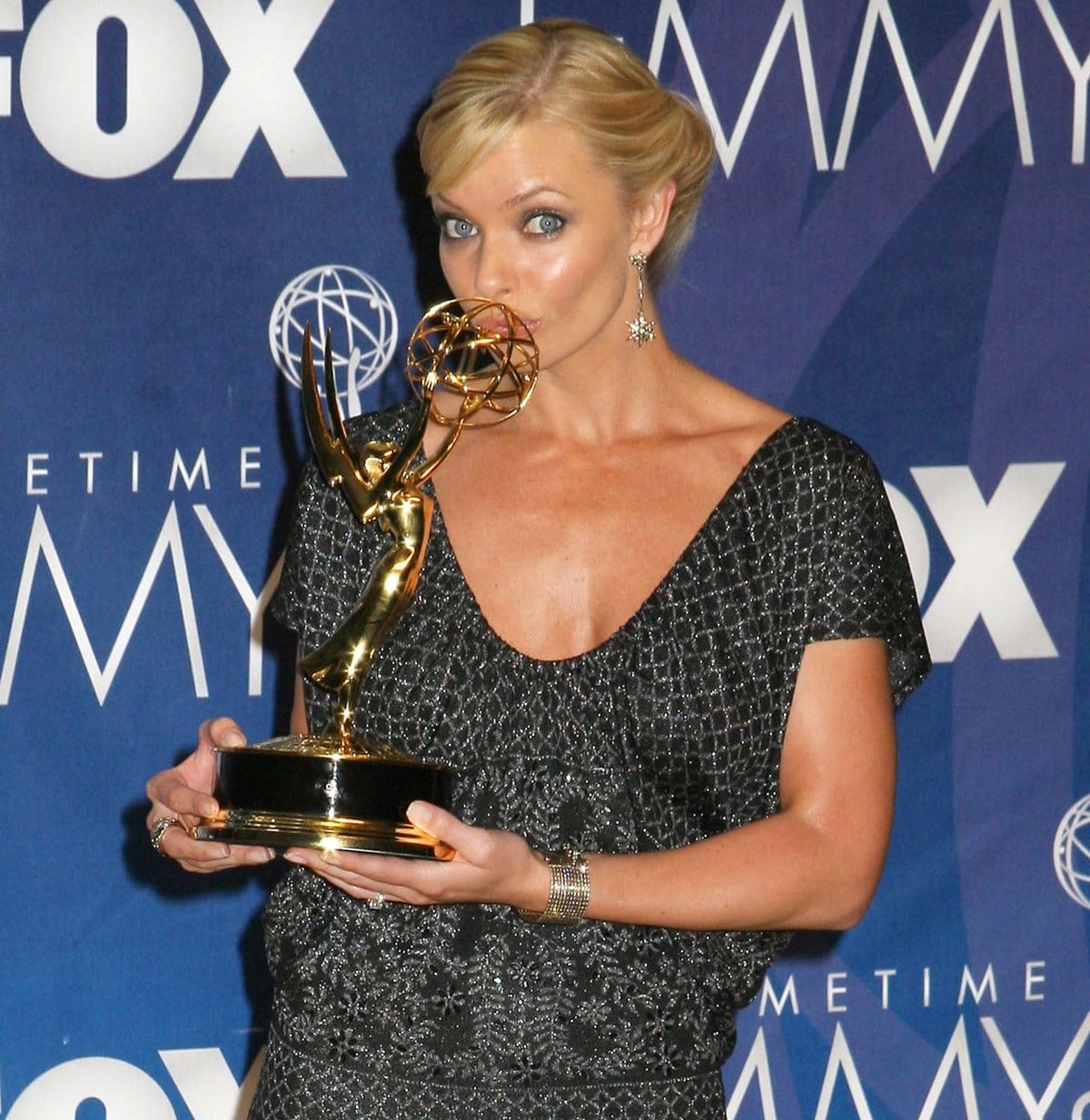 Jaime Pressly won an Emmy Award for Outstanding Supporting Actress in a Comedy Series for her work on the American sitcom television series My Name Is Earl (Credit: Adriana M. Barraza / WENN)

Though she has spent much of her career on the small screen, Pressly has performed in some notable films, including Not Another Teen Movie, Joe Dirt, and I Love You, Man.

Pressly spent a lot of time in the tabloids while My Name Is Earl was being produced. After the show was unexpectedly canceled in 2009, she spent some time out of the spotlight.

The blonde Playboy bombshell later revealed that she took some time away to focus on family; she now has three beautiful children.

On the other hand, though Margot Robbie initially got her start acting in television, the majority of her credits are dominated by roles on the silver screen.

She is famous for her roles in The Wolf of Wall Street, Mary Queen of Scots, and Once Upon a Time in Hollywood. 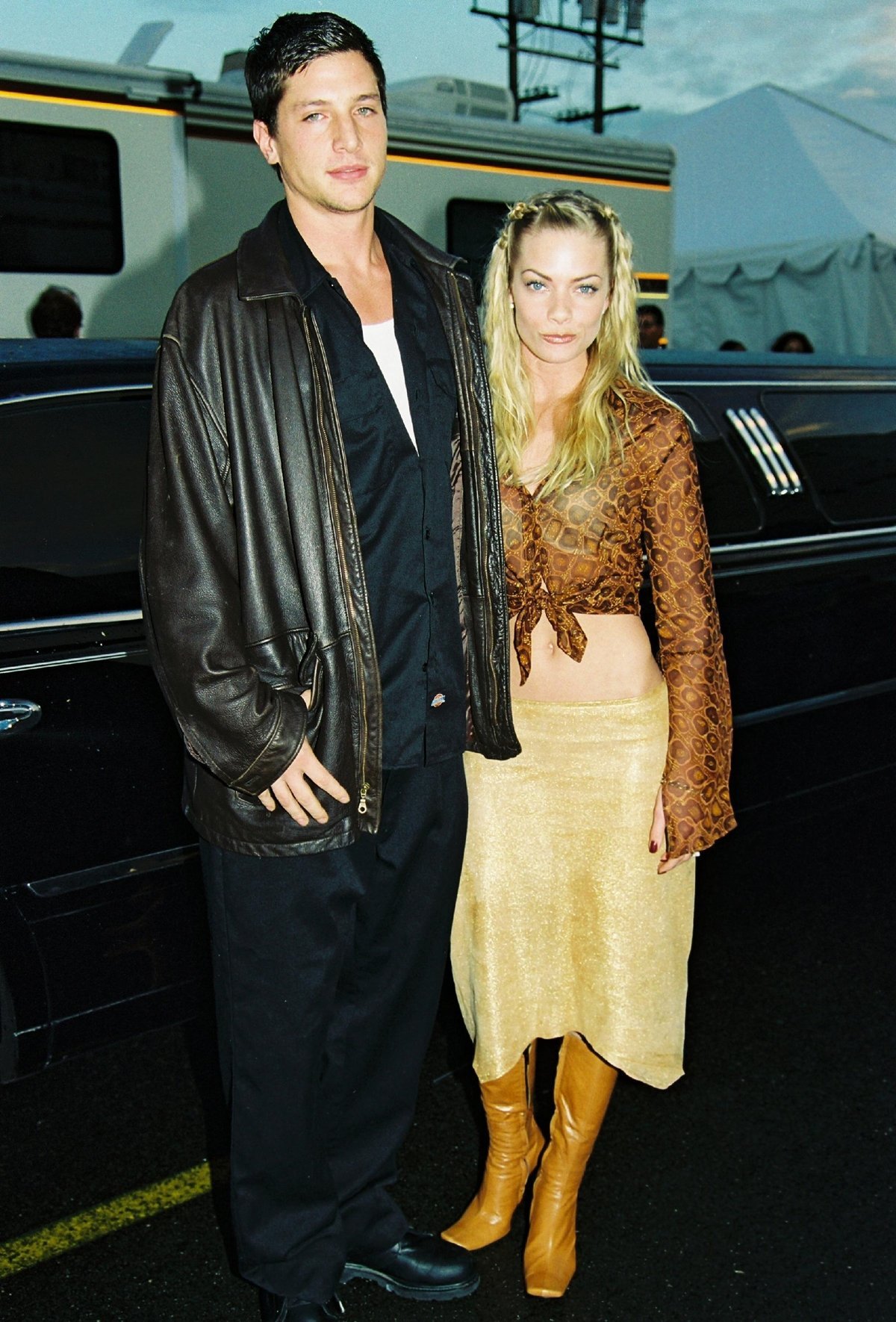 Her theatrical prowess has been highly praised by critics, as she was nominated for two Academy Awards: Best Actress for I, Tonya, and Best Supporting Actress for Bombshell.

The actresses have been asked about their uncanny likeness in interviews, and neither has been offended by the comparison (why would they be?!)

Pressly told a photographer, “Right, right, well that would be she looks like me! I think she’s great, yeah, I’ve loved everything she’s done.”

Of course, Pressly is 13 years older than Robbie, so you could argue that she did have their face first. 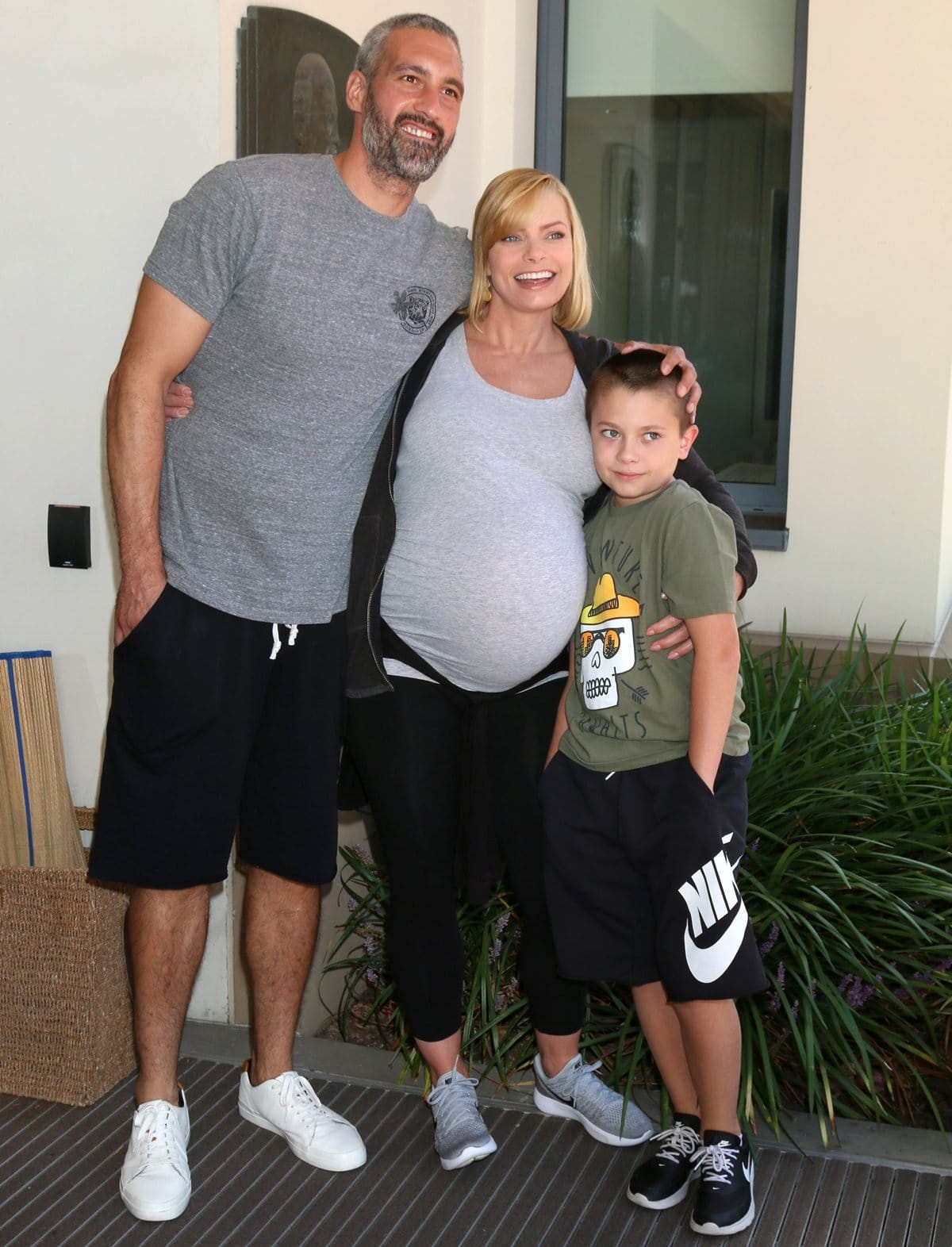 After years of confusing fans and moviegoers, the doppelgängers finally met face-to-face in 2018. In photos, they both look very surprised—which makes sense. Meeting yourself in person must be a very jarring experience.

Though Pressly and Robbie have (almost) the exact same face, there are some glaring differences between the two that put any of the “same person” theories to rest once and for all.

If you are still having issues differentiating the two, these tidbits should help as a “Is It Jamie Pressly or Margot Robbie?” guide.

One thing is for sure, if you ever meet Jamie Pressly or Margot Robbie in person, make sure you know who is who. But hey, you never know! Margot Robbie might get a kick out of signing your My Name Is Earl poster.

In January 2018, Margot Robbie, who had garnered attention as Harley Quinn in “Suicide Squad,” was quickly moving on to bigger challenges. 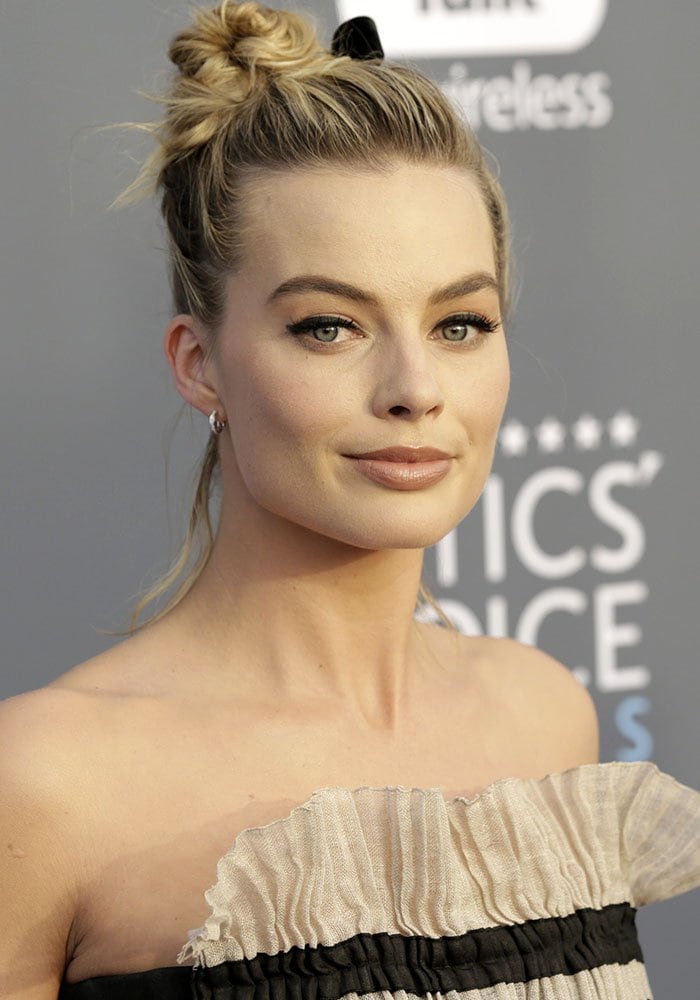 Margot Robbie with a messy bun created by Bryce Scarlett at the 2018 Critics’ Choice Awards held at the Barker Hangar in Los Angeles on January 11, 2018 (Credit: Brian To / WENN)

When she got the opportunity to produce the film “I, Tonya,” the Australian actress pushed herself further by opting to take the leading role herself. 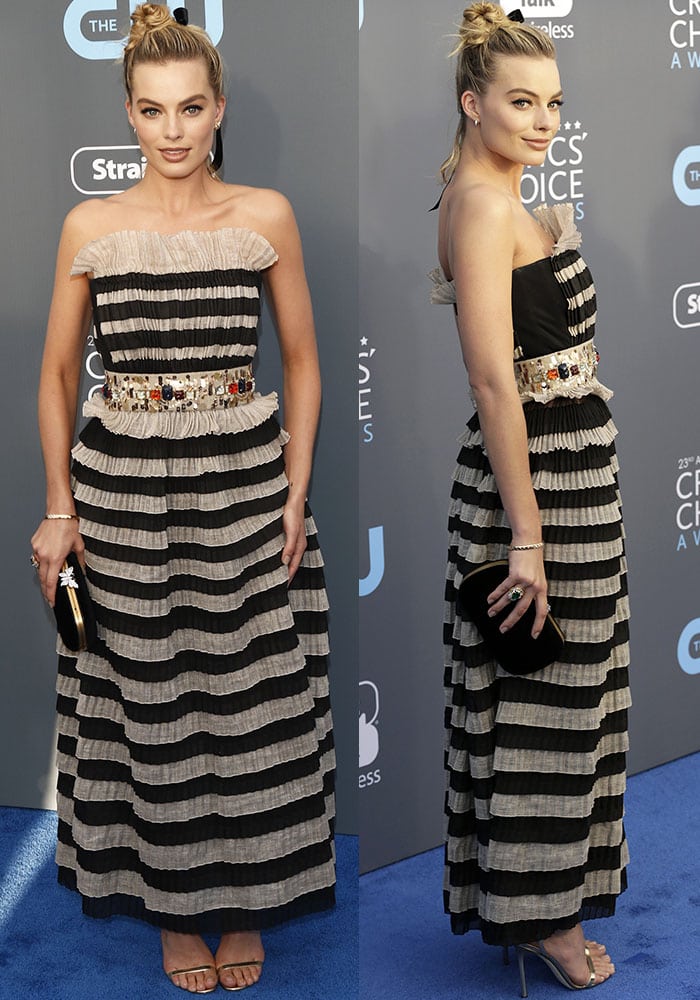 The then 27-year-old actress took the project seriously, and her efforts paid off as she bagged one win and a nomination at the 2018 Critics’ Choice Awards held at the Barker Hangar in Los Angeles. 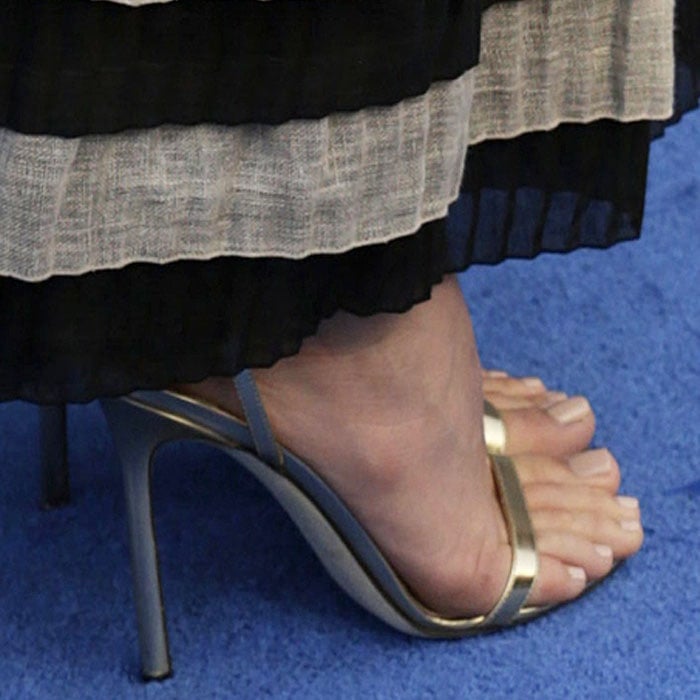 While Margot could have easily ended up looking like something out of either the “Corpse Bride” or “Beetle Juice,” the actress managed to escape unscathed thanks to a few added touches here and there.

Margot wore a black and white Chanel dress that pieced delicately pleated panels together. The neckline and waist fanned out with single ruffled pieces. 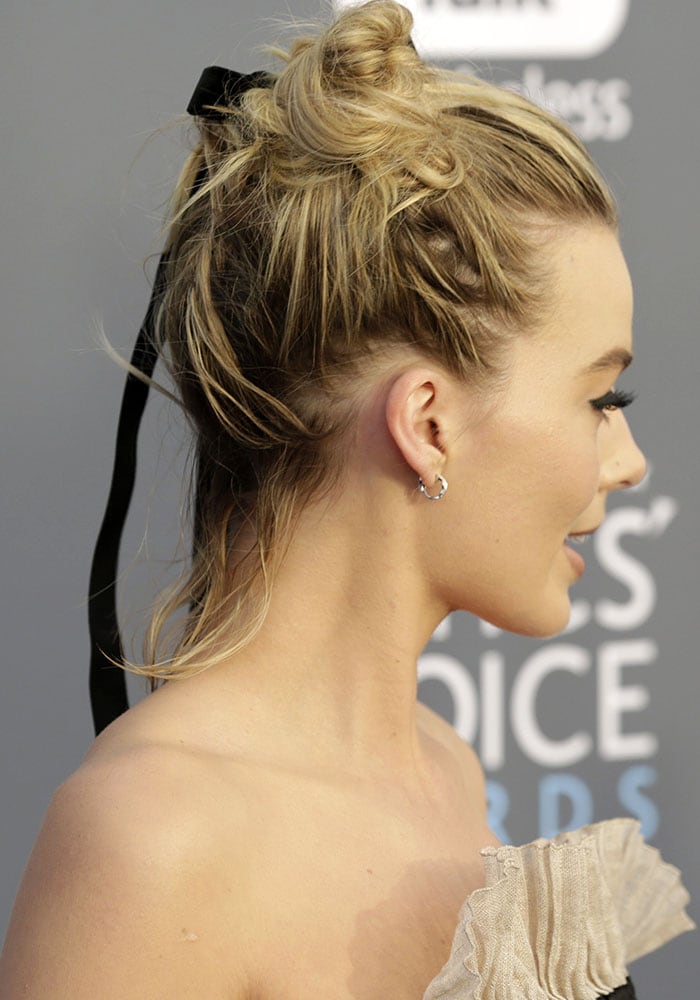 Margot shows off her romantic and modern messy updo (Credit: Brian To / WENN)

This is a look that would definitely divide the fashion crowd, and that is why we love it. It wouldn’t be Chanel if it didn’t shake the status quo. We’re a bit unsure about the unique neckline, but overall we have to admit that we love this look.

Margot finished her look with a pair of classic Jimmy Choo “Minny” sandals in metallic leather. 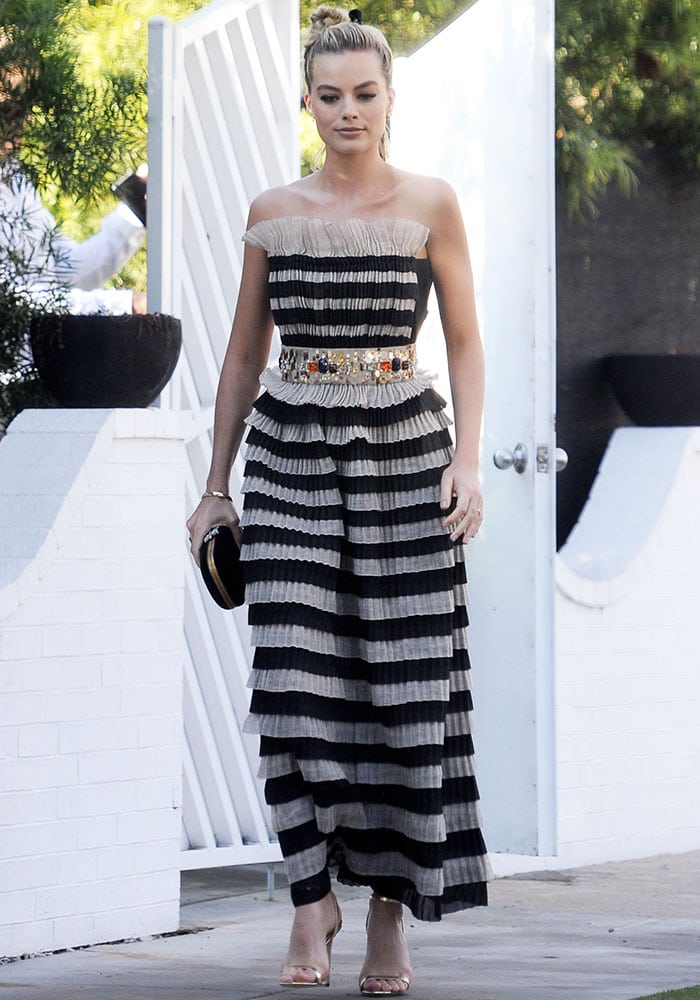 We also loved Margot’s messy side updo accented with a black velvet ribbon, as well as her heavily embellished belt.

Margot represented the film “I, Tonya” where her role as ice skating Olympian Tonya Harding won her the award for Best Actress in a Comedy. The actress was also nominated for overall Best Actress but lost the award to Frances McDormand.

The Once Upon a Time in Hollywood actress has defended real-life Tonya Harding, who was allegedly involved in the knee-bashing incident toward rival Nancy Kerrigan leading up to the 1994 Winter Olympics. 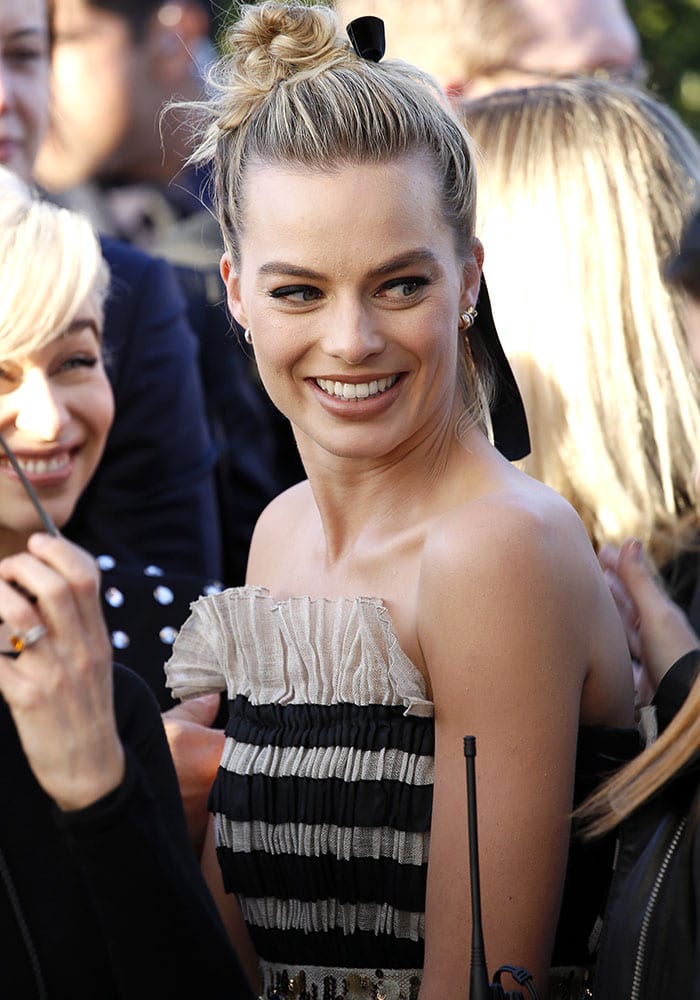 Margot Robbie is all-smiles despite the hustle and bustle of the awards backstage (Credit: WENN)

You can shop Margot’s timeless Jimmy Choo “Minny” sandals at Amazon and Farfetch. 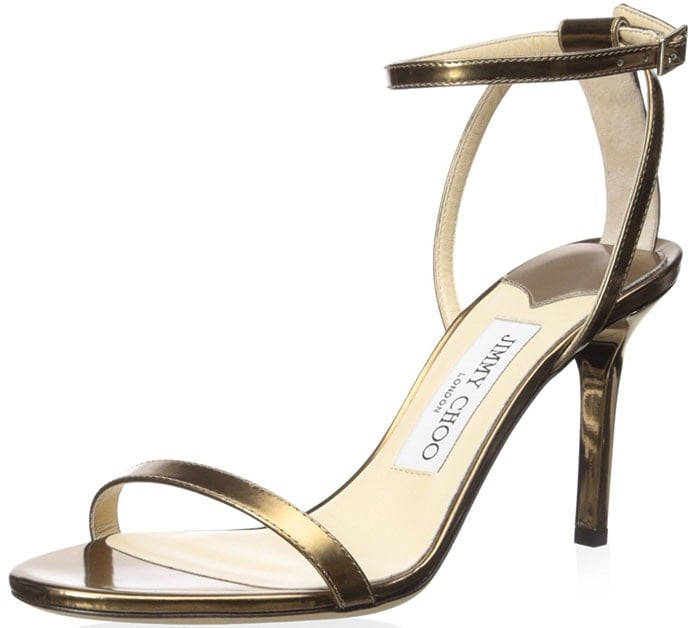 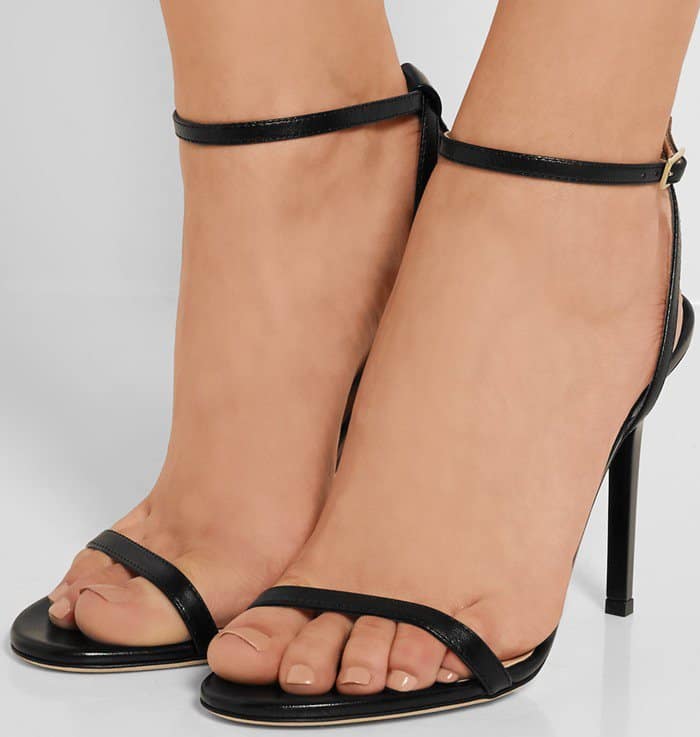 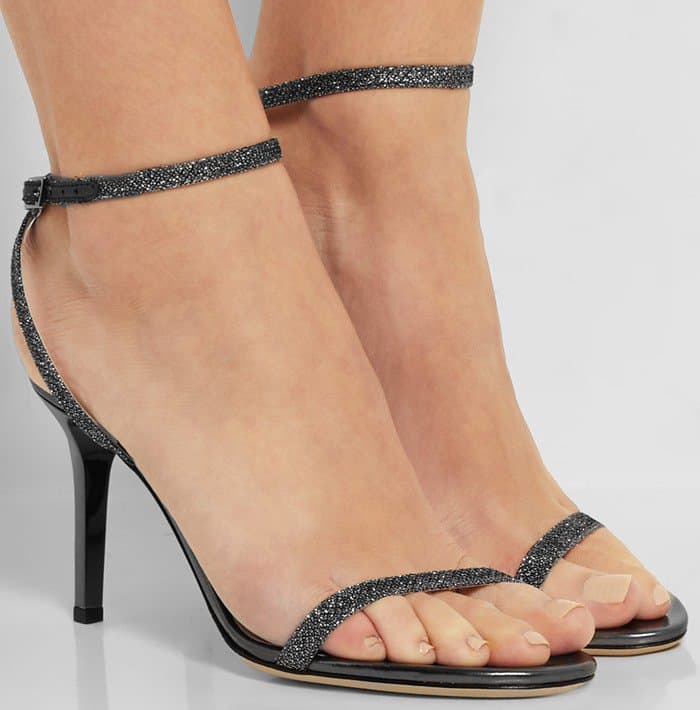 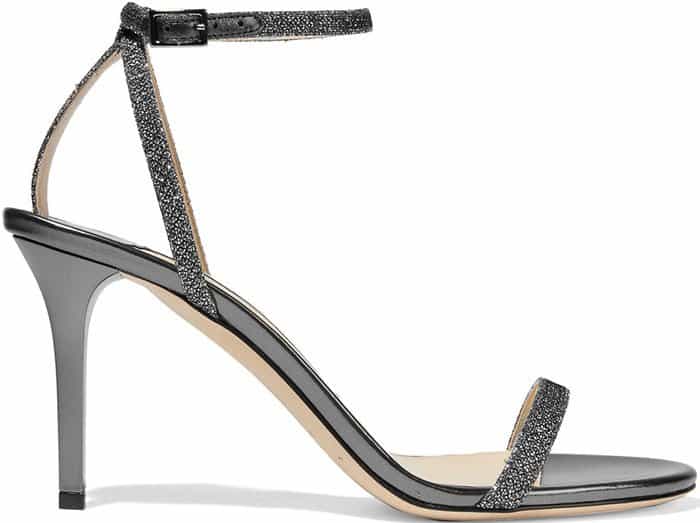 How To Launch a Mentos Soda Rocket