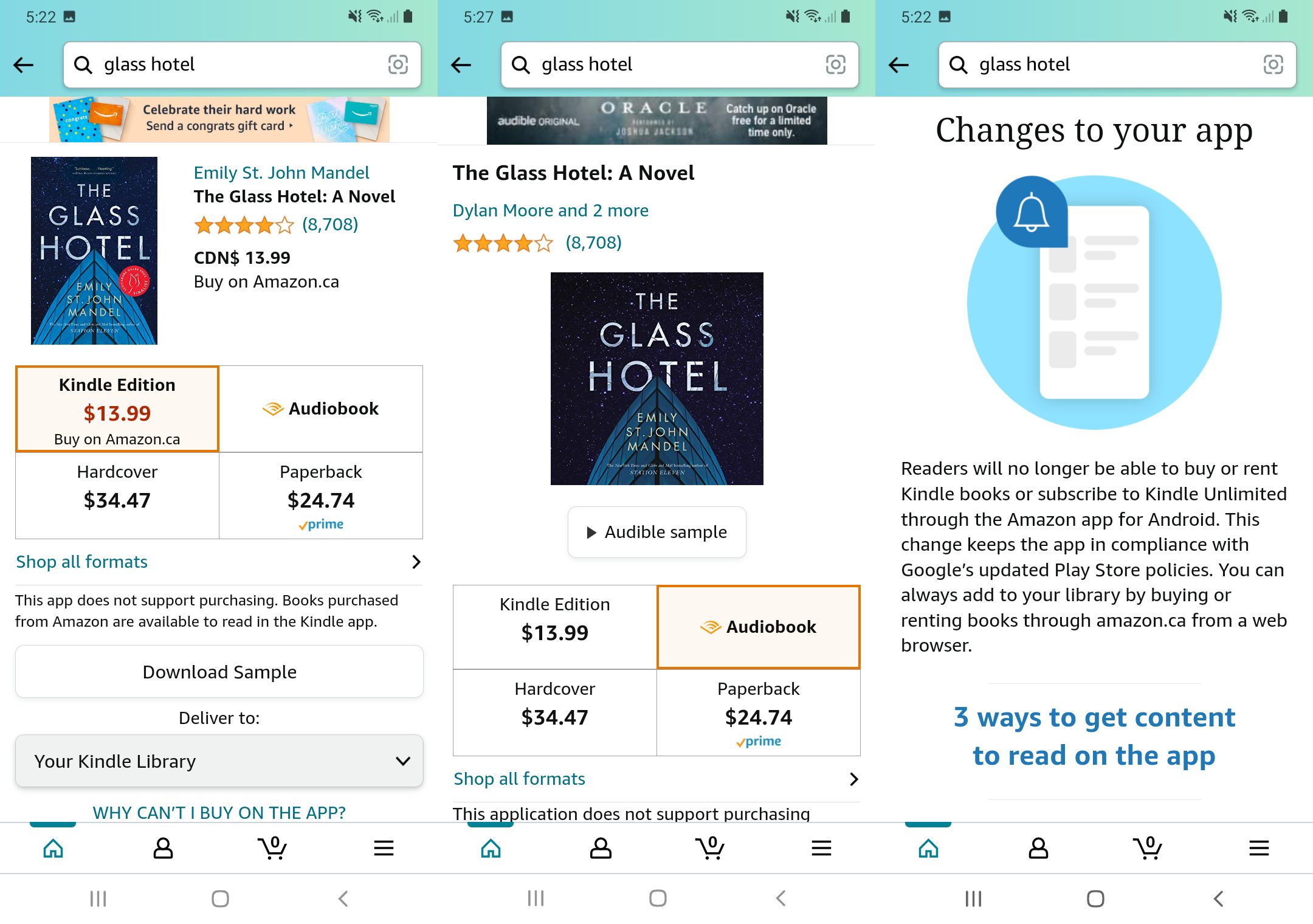 Good e-Reader has new information regarding Amazon suspending the ability to buy Kindle Books in the main Amazon Shopping App for Android. The Amazon App no longer supports the purchasing of Kindle books and audiobooks. However, at the time of writing, the Kindle App for Android continue to support the purchasing of Kindle Books for the foreseeable future. Amazon confirmed this with us, earlier today. There was lots of conjecture around mainstream media, on what exact version of Amazon branded apps would cease supporting digital content and it is now 100% evident that users who buy books with the Amazon Shopping app, can’t buy Kindle Books or audiobooks. The Kindle app, which basically everyone uses is safe for now and will continue to offer ebook purchases.

Amazon owned Audible ceased selling individual audiobooks through their Android app from Google Play a couple of weeks ago. This will prevent anyone from buying audio titles individually. However, Audible still sells subscriptions through the app and will continue to offer credits for exiting members. Around the same time that Audible announced their new policy shift, Barnes and Noble announced they will no longer do business with Google at all. They ceased offering audiobooks, ebooks or subscription purchases through their flagship Nook App. This not only affects users who downloaded the app on their smartphone, but also people who bought a Nook Tablet.

Why has Amazon, Audible and B&N shifted purchases away from their app? Towards the of the last year, the company announced that they were going to enforce that everyone who sells in-app content in their apps, would have to use Google Billing. Google said that apps do not adhere to this new policy, would actually be delisted from the platform, so nobody would be able to download their apps anymore. This is really inconvenient for users, I know lots of serious readers who embraced the Android ecosystem on their phones, tablets or e-readers, just to be able to buy things.

One of the bright spots of this new policy shift from Google, is that some of the largest digital bookstores will continue to offer the sale of digital books. This not only includes the Kindle App for Android, but also Kobo. Kobo confirmed with Good e-Reader that they will continue to offer audiobooks, books, manga and Kobo subscriptions for their unlimited subscription program. How long will this last? Google taking a 30% cut of every book sold is not really sustainable and is the main reason why all of the big online bookstores fled Apple and their iOS platform when they told everyone to use their own billing system and also took a 30% cut. So why is Amazon and Kobo willing to pay a 30% cut on Android and not iOS? This is a topic for another day.